Speaking during the ceremony held at the National Treasury building, the CS noted that as the country’s leading energy producer, KenGen was a major player in the Government’s efforts towards the country’s growth and development.

“Energy is critical for the country’s growth and development. We take cognizance of the important role played by KenGen in growing the economy,” the CS said.

During the event, Mwathethe said, “We are indeed privileged and honoured to pay the Government Sh. 1,153,856,022 in dividend at a time when businesses are facing enormous challenges occasioned by the Coronavirus Disease (COVID-19) pandemic.”

He expressed gratitude to the Government for consistent support over the years, saying it had contributed to KenGen’s growth and positive performance.

For the year ended June 2020, KenGen announced a Sh. 13.9 billion profit before tax.

Launch of REITs by ACORD

The National Treasury and Planning has embarked on the process of preparing the Financial Year 2021/22 National Budget as... read more 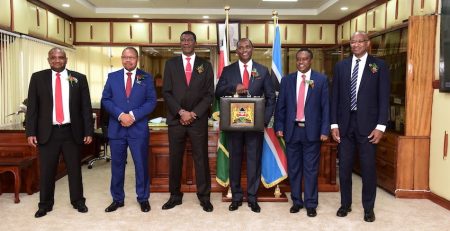 DISBURSEMENTS OF FUNDS TO COUNTY GOVERNMENTS

1. Pursuant to Article 218 of the Constitution of Kenya, the National Treasury and Planning prepared the Division of... read more